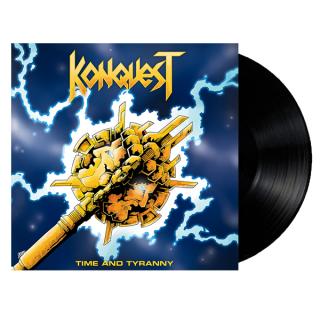 Based in Italy, KONQUEST released the debut album "The Night Goes On" in January 2021 on Iron Oxide Records (CD version) and No Remorse Records (limited LP version), with the vinyl version becoming sold-out very fast. In the new album "Time and Tyranny", KONQUEST keep the passionate NWOBHM-worship and HEAVY LOAD-inspired elements adding their own character to an album that brings back '80s and old-school heavy metal originality and magic.

A2. Time And Tyranny

A3. Something In The Dark

A4. The Light That Fades Again

B3. Enter The Warrior

B4. Warrior From A Future World