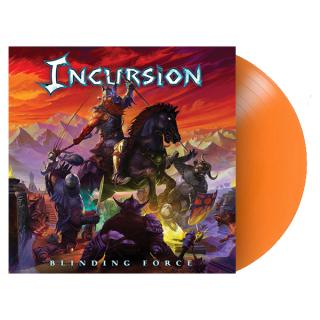 With thunderous glory, INCURSION present their full-length album "Blinding Force" on No Remorse Records. Harking back to metal's glory era, the album's nine songs have squarely placed them poised to ride the momentum of their debut EP "The Hunter". The band consists of vocalist Steve Samson, guitarists Maxx Havick and Michael Lashinsky, drummer Dan Douchette, and bassist Robbie Cred. INCURSION are ready to take their metallic onslaught to fans of Traditional Heavy Metal with the album "Blinding Force" that is highly recommended for fans of bands such as RAVEN, JAG PANZER, RIOT CITY and TRAVELER.

B2. Master Of Evil