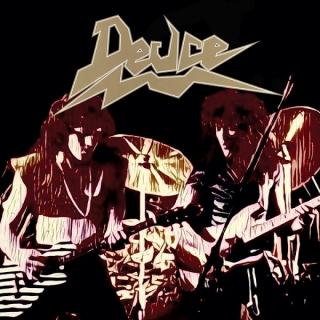 "Deuce" consists of historic recordings including the first steps of a metal guitar legend. Guitar virtuoso Marty Friedman (solo, ex-MEGADETH, ex-CACOPHONY) along with musicians like Tom Gattis (guitars - vocals) and Billy Giddings (drums), both members of TENSION, deliver US Heavy Metal of its early forms, since "Deuce" includes the band's recordings from 1978 and 1979 plus 2 tracks from a DEUCE 1993 brief reunion. To this day, these recordings have reached the level of a legendary cult status scale on the collectable metal scene, and now they are available officially on CD format mastered by Bart Gabriel (CIRITH UNGOL, HEXX, PAGAN ALTAR) including extended liner notes & the DEUCE story plus rare photo material.