WARRIOR PATH vinyl records to be released by No Remorse Records. 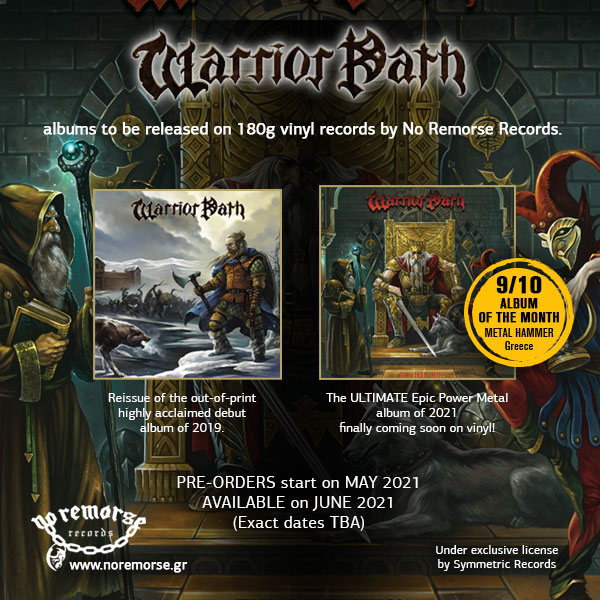 Pre-orders for both "Warrior Path" and "The Mad King" vinyl versions will go online on May 21st, release date is set for June 30, 2021.

Warrior Path's sophomore album "The Mad King" is one of the greatest power metal surprises of 2021 so far. For those who followed the band since their same-titled debut album of 2019 this wasn't really a surprise but the next logical step.

Recently released by Symmetric Records (CD / digital), "The Mad King" will finally see a vinyl release by No Remorse Records, along with a new vinyl pressing of the same-titled album since there is huge demand for the debut album, too.

Those releases were a last-minute addition in our catalogue and even if we will probably have them earlier, we need to keep a release schedule.

"The Mad King" will be released on 180g black vinyl, and a limited edition of 150 copies of 180g transparent blue vinyl with black splatters, in gatefold sleeve.

"Warrior Path" will be re-released on 180g black vinyl, and a limited edition of 150 copies of 180g transparent blue vinyl with black splatters.

At the same time, Warrior Path and Symmetric Records will complete the orders including vinyl records bought from their website/bandcamp, including the limited red version of "The Mad King" that was sold-out during their pre-orders. Symmetric Records is going to have their copies in the next few weeks and will start completing their vinyl orders during early-June.

Spread the word. Stay calm with your sword in hand.