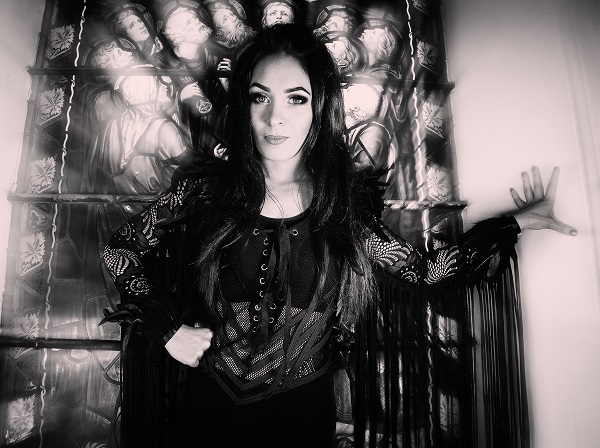 During Up The Hammers Festival of 2018, Rock Pages GR had a video interview with Marta Gabriel, revealing the story behind the formation of Moon Chamber…

“The story started last year, in December (2017), when Rob Bendelow, the composer of Saracen, found me on the internet. He found Crystal Viper and my voice. And he liked my voice… he said that he got inspired by my voice so much that he wrote a song and sent it to us, for me to sing.  I felt so honored because I am a huge huge Saracen fan! This is one of my favorite heavy metal bands. You can hear Saracen vocalist on Crystal Viper’s last album. So, we received the song and I loved it completely and I said that it was something very cool to record the vocals, just for us, just for fun and let’s see what happens. Before I even had the chance to record the vocals from that song, Rob said that the first song needed a b-side. So, he composed another song for me to sing. That was amazing! The song was totally beautiful, so we started to talk about doing an album together. Two months later the album was ready! Rob is a fantastic composer, he is a genius song writer.  Right now we are signed to a Greek label, No Remorse Records. This summer we will complete the album and it will be out this year (note that the interview took place in May 2018!). The band is called Moon Chamber and it’s not heavy metal at all. It’s something between like Uriah Heep, Led Zeppelin, Jefferson Airplane… ‘70s rock. So, it’s something completely different to what I do with Crystal Viper, or other things that I’ve done in the past. And it was also the perfect moment for me, because at the end of last year I was like…  “well, it would be great to do something different, maybe create a new band…” and  wow, three days later Rob contacted us for the song! Well, I was speechless really! I was so excited about this band and I am looking forward to recording the album and for the upcoming shows. We will record the album in a studio in Poland. I hope you will like it, because I am very excited about that! And Rob is also!”