RANDY complete anthology to be reissued including previously unreleased studio and live material. 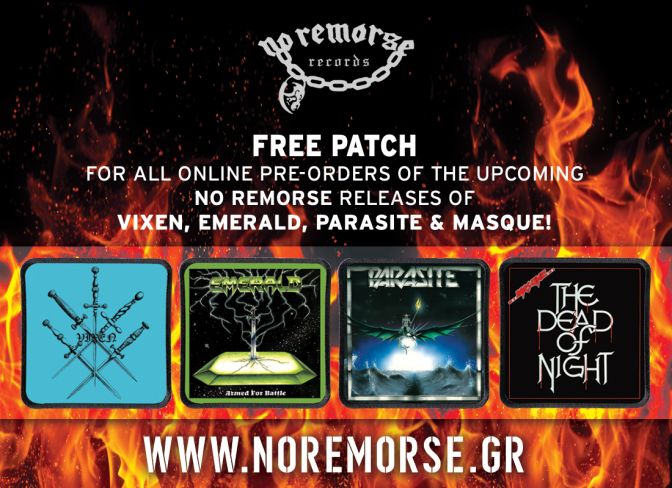 For each pre-order from our online store of any version (CD or LP) of the upcoming No Remorse reissues of VIXEN, EMERALD, PARASITE and MASQUE, each client will receive a FREE patch of the reissue he will pre-order! The offer is valid only during pre-orders and will expire once the items will be available.

VIXEN - Made In Hawaii

One of the "crown jewels" of US Power Metal! Highly recommended for fans of QUEENSRYCHE, SACRED WARRIOR and ‘80s US Heavy Power Metal. Both CD and vinyl version include bonus tracks and liner notes.

One of the best releases of '80s Swedish Heavy Metal! Highly recommended for fans of EUROPE, UNIVERSE and HEAVY LOAD. Both CD and vinyl version include 5 bonus tracks.

MASQUE - The Dead Of Night

First official reissue of a British Metal gem on vinyl and available for first time on CD. Both CD and vinyl version include 6 bonus tracks. Highly recommended for fans of IRON MAIDEN and CHASTAIN.

Sinister Ultra Metal! “Architects of Evil” is a blend of pure Heavy Metal with epic, power and tech thrash elements. It will fit in the taste of a variety of Metal fans that worship bands from MANOWAR to JUDAS PRIEST, RAM and beyond. One of the best metal albums of 2018!