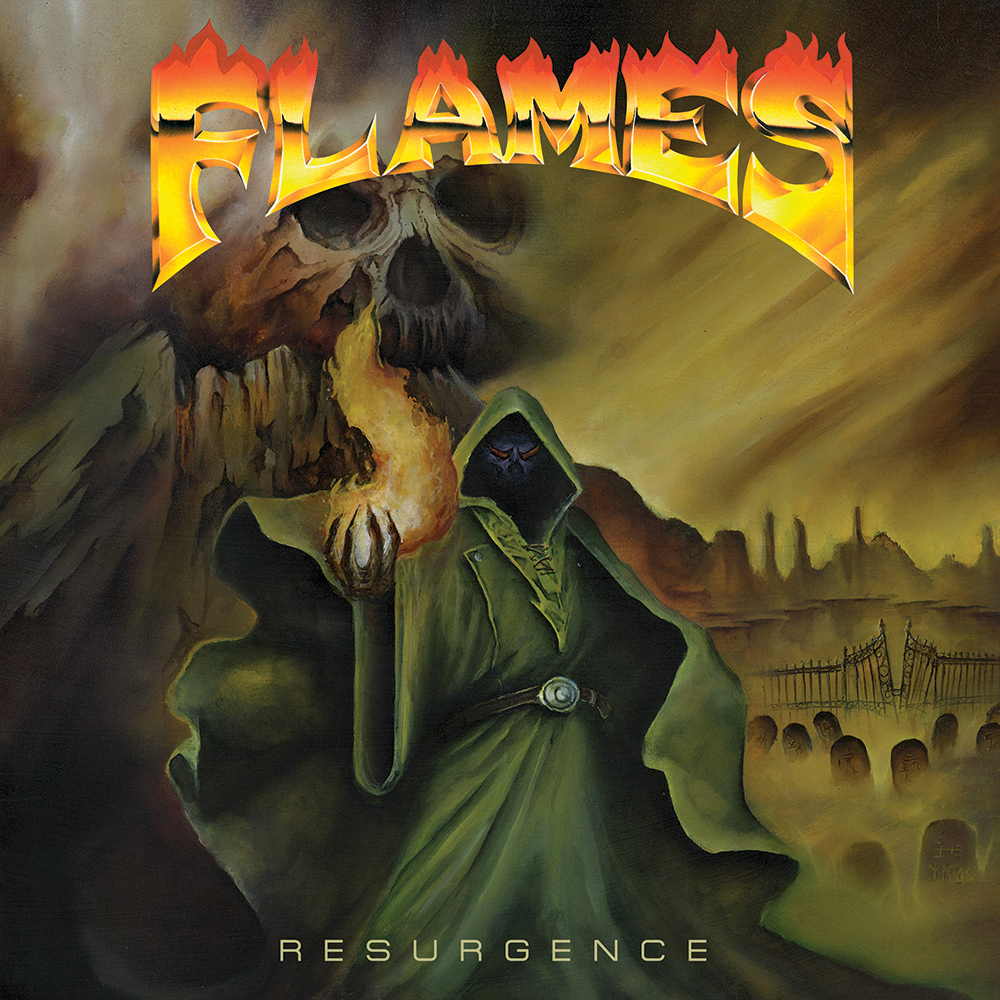 Exact release date, formats and pre-order, to be announced in the next few days.

Flames is a Thrash Metal band, formed by Chris Kirk in 1984. Since then they have released many albums and they have participated in many live shows as headliners or guests often next to great bands. The band resides between Athens, Greece and Munich, Germany and since 1984, the band’s lineup has changed several times but always with the Kirk brothers as the core. The current line-up is: Tom Trampouras (guitars, vocals), Chris "R.B. Lee" Kirk (guitars), Andy Kirk (bass guitar) and Nick "Yngve" Samios (drums).

The new album "Resurgence" is produced and mixed by Bob Katsionis at Sound Symmetry Studios.

Cover art of the new album is created by Wyrmwalk.

1985 –1986: In the very first year of the band’s life, Flames managed torecord and release two albums, “Made in Hell” and “Merciless Slaughter”.

- “Made in Hell” was the first album. Recorded during the summer of 1985 from Chris (guitars), Nigel (guitars/vocals), Ted (bass) and later Andy Kirk (also on bass). Since the studio capabilities were limited, the result considering the conditions was… epic. The album was released in 1985 from FM Records in Greece, and from Babylon Records for Germany, introducing Flames to the European metal audience.

- “Merciless Slaughter”, just like “Made in Hell” was recorded in a very short time just after the first album, in the same studio as before. At this time though, the band had more experience and better songs. The lineup was Nigel (guitar/vocals), Chris Kirk (guitars), Andy Kirk (bass) and Gus Collias (drums). Right after the recordings, Gus for personal reasons left the band and for the upcoming live shows in that year, George Andrian (Andreakos) joined Flames as the new drummer. The music of the second album is more aggressive, pointing the way which later Chris would leadt he band, and the songs are a mix of power and speed/thrash metal. The LP was released in 1986, once again by FM Records for Greece and by Magic Music Records for Germany. The LP front cover was a choice from FM Records and it’s a brutal picture of a wax head with an antiwar message… After that LP, Flames changed their singer and Alex Ossek joined the band.

Flames during the following years worked hard for many live shows and the band’s  next releases:
- “Live in the Slaughter House” (1987), a live EP with four songs featuring the ex-singer Nigel.
- “Greatest Hits” (1988), released by FM Records.

With the album “Summon the Dead” a very successful era begins for Flames. A new beginning with new songs and sound. The band sounds more aggressive now, performing pure thrash metal and many live shows. The album was released in 1988 internationally by the French label Black Dragon and made the band worldwide known. Flames was the first metal band in their home country, with an international release by a foreign label. Flames' presence and albums were a key element for the promotion of the Greek metal scene outside the country and after that, many thrash metal live shows began taking place in Greece. During this album and for the needs of the live shows, Athan Schitsos handled the rhythm guitars for a short period of time.

Only one year after “Summon the Dead”, Flames released their next album, “Last Prophecy” that was distributed by FM Records. The band keeps performing fast and aggressive, more technical, and also the songwriting is more mature and a bit more complex. The production is the best that Flames ever had up to date, making the band competitive to the international thrash scene. With this album, the band continues their live shows making the thrash metal scene grow in their country. During this year, the new singer (and guitarist), Tom Trampouras, joined the band.

After many live shows between 1989 and 1991, the band (Chris, Andy, Tom, and George), entered the studio to record a new album. The album titled in Latin “Nomen Illi Mors” (His Name is Death), is very hard to find, because it was released in a very limited number of copies. Originally intended to be a demo, ended up to be released in limited edition only in Greece and became kind of legendary, due to the band’s live shows. After the album's release, Andy and George joined the army so Ilias Pavlioglou (bass) and George Papageorgiou (drums) took their place for the upcoming live shows.

After a short break since 1991, the original band members Chris Kirk (guitars and now also on vocals) and Andy Kirk (bass) are together again, since Andy moved to Germany. Together, they completed the band’s lineup, with the singer Flo Gebhardt, guitarist Tassos Spiliotopoulos and the drummer Angelos Asimakopoulos.

After some very successful live shows, the band entered the studio once again, to record the next album, titled “In Agony Rise”, which was released during the same year, by the independent label Poco Records and was produced by the band itself. With this album, Flames officially introduced an old friend and now a member of the band, the German singer Flo Gebhardt who performed the vocals. After the album’s release, the band promoted it with live shows as well.

The band participates among many other local bands in a new compilation album titled “A Tribute to Bathory” with the song “The Return of Darkness and Evil” adding their personal style to the song. This compilation was released by the Metal Invader zine as a tribute to Bathory. During that period, Tassos left the band and went on to have a successful career on his personal music style on guitar. Chris, Andy, Flo and Angelos continued playing music together.

The band returns to the studio to remaster some of their old songs and the compilation album “Legacy”, is released on 11-11-2011, including 20 of the best songs from the history of Flames. After many years in Flames (since 1994) Flo gave up his place on vocals but still since then, he remained an honored member.

Chris and Andy are joined by Tom, once again an older member, returning to handle guitar and vocal duties, and with the new drummer Nick, started working on the upcoming album.

The new 7th album is ready and the title is "Resurgence". Moreover, the band will focus on playing somelive shows whenever it is possible.