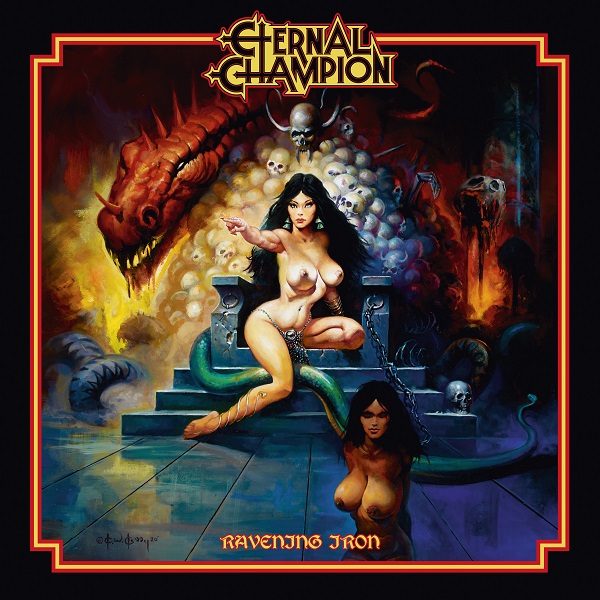 NO FORCE WILL HEED MY PACE

After a demo recording in 2013 and the split EP with Gatekeeper in 2015, it was obvious that the name of ETERNAL CHAMPION was going to dominate the underground metal scene. But it was more than that. The debut full-length album ‘The Armor of Ire’, released in 2016 by No Remorse Records, became one of the best and most hyped albums of the last years, breaking the borders of underground traditional metal and reached a wider audience and fans of all metal genres, including also the hardcore and crossover scene. It was a fresh breath of passionate metal by fans for fans of hard and heavy music.

The impact of ‘The Armor of Ire’ was instant. And still is, since after 4 years, the metal scene is still waiting for the next step of ETERNAL CHAMPION with high expectations. People haven't forgotten them and their name is mentioned among the best releases of the decade. ‘The Armor of Ire’ is already considered as a modern classic, inspiring also a new generation of epic heavy metal bands, and ETERNAL CHAMPION was carefully working on the new album after performing live in festivals like Keep It True, Up the Hammers, Frost and Fire, and also many more live shows in the United States and Europe.

When the ideas started taking shape and everyone knew that this was going to be ground-breaking, for the cover artwork it was decided to approach the only one who could visualize the sword and sorcery lyrics that are an important element in the music of ETERNAL CHAMPION.

THE STORY OF THE COVER ART

After considering, contacting and talking with the best artists existing, it was decided that with such a material, it had to be the best one, no matter what. At that point, Jason Tarpey came with the idea to contact Ken Kelly, the artist behind iconic hard rock and heavy metal album covers like KISS ‘Destroyer’, RAINBOW ‘Rising’, MANOWAR ‘Kings of Metal’ & ‘The Triumph of Steel’, and also a legend on paintings in the sword and sorcery and heroic fantasy subgenres.

ETERNAL CHAMPION came with the main cover idea and No Remorse Records started the contact and communication with Ken Kelly in order to work with the legendary artist. For many months and while exchanging ideas between all parties, Ken Kelly presented exactly what ETERNAL CHAMPION wanted, to complete the band's aesthetic. A masterpiece.

IN THE GLARE OF MY STEEL

Produced, mixed and mastered by Arthur Rizk (Sumerlands, Crypt Sermon, Cavalera Conspiracy, Power Trip, Sacred Reich), ‘Ravening Iron’ has the massive sound that epic heavy metal needs nowadays; faithful to the past, yet fresh and exciting with ETERNAL CHAMPION’s unique identity and aesthetic in full presence. The 8 tracks are glorious and uplifting, with heavy riffs, synths, a hard and pounding rhythm section, narrating stories and legends from the depths of time and fantasy.

6. Worms of the Earth

RAVENING IRON will be released in the following formats and territories: