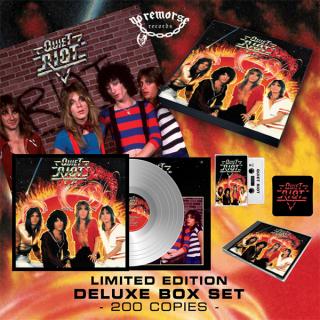 QUIET RIOT is a phenomenon with a long history. The first incarnation of the band goes way back and in 1975 the name QUIET RIOT was born, with the line-up of guitarist Randy Rhoads, vocalist Kevin DuBrow, bassist Kelly Garni, and drummer Drew Forsyth. Despite the local popularity in Los Angeles, California, they didn't manage to secure a record deal in the United States but they released the "Suicidal Show" EP in 1975, a historical recording that is also included herein. The "Quiet Riot" album was originally released in Japan, on vinyl only, and now it is finally reissued, offering to the fans a sentimental and nostalgic look in QUIET RIOT's early years. Randy Rhoads later joined Ozzy Osbourne, and with a different line-up, QUIET RIOT in 1983 released "Metal Health", that became the first heavy metal album to top the Billboard album chart, reaching a 6x Platinum status in the United States, helping the (new then) generation of '80s hard rock and (pop) metal music to have a wider access on radios and TV shows.